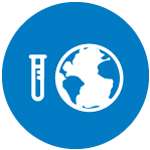 Change in the number of days per year when mean temperatures were in the warmest 1% of all days on record.

These data were compiled in March 2022 by reviewing the total annual rainfall records for each of the Local Government Authorities in the Northern Agricultural Region since 1990, as posted by the Australian Bureau of Meteorology. Data were aggregated by averaging total rainfall for all coastal LGAs and all inland LGAs separately. These data will be updated in February each year.

Change in sea level along the coast of the Northern Agricultural Region.

These data were compiled in March 2022 by reviewing the Observed Monthly Sea Level data collected by the Australian Bureau of Meteorology’s Marine & Ocean section. Data were aggregated by averaging observed monthly sea level records to obtain annual average sea level data per year for each of three locations relevant to the NAR – Fremantle, Hillary’s and Geraldton. Data from Fremantle and Hillary’s were included to represent the south of the region as no other data were available south of Geraldton. These data will be updated in February each year.